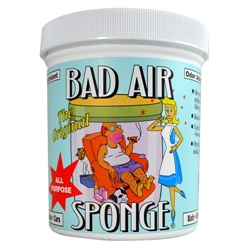 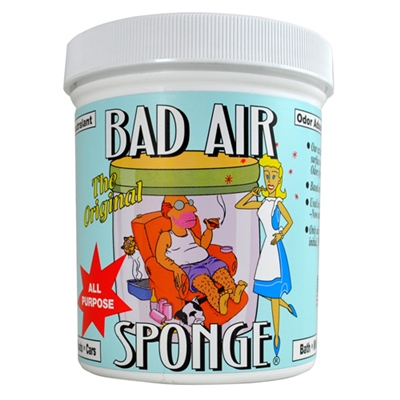 Eliminate odors from pets, urine, mildew, and many other odors safely with The Bad Air Sponge.

The Bad Air Sponge does not mask odors with powerful scents or perfumes; it totally eliminates odor. When placed near an odor producer, it neutralizes the odors in the air as well as drawing out the odor causing molecules and neutralizing them. The Bad Air Sponge is the only air freshener you need. It can be used to remove any unpleasant odor from your home, office, boat, camper or anywhere where odors exist. It does not need to directly come in contact with any odor sources to eliminate them; just place it near the odor and it will eliminate the it.

The Bad Air Sponge is used by professionals and home owners for the last 50 plus years and has become the standard odor remover for the entire disaster restoration industry. The Bad Air Sponge is frequently used to eliminate very potent odors including those due to mold, mildew, sewer gas, cleaning solvents, latex and oil paint fumes, formaldehyde, ammonia, and even human decay. The Bad Air Sponge works by neutralizing odor molecules in the air as well as pulling out and neutralizing odors from porous materials and objects including furniture, carpets, drapes, walls, and upholstery. This process makes it the best air freshener on the market today.

The Bad Air Sponge is non-toxic, natural, and safe. It is safe to use as an odor removal product around your family, your pets, and your children. It is non-toxic and non-flammable.